The below video shows you a thin film experiment and measurement, much like the one on the rest of this page.

Time Frame: 60 min period or less depending on how long it takes for the required content before the activity
Set-up:
Activity 1: (5 min)

Objective(s)
After completing the activity, participants will be able to:

Engineering principles
Grade Band End Points for ETS2.B
By the end of grade 12. Modern civilization depends on major technological systems, including those related to agriculture, health, water, energy, transportation, manufacturing, construction, and communications. Engineers continuously modify these technological systems by applying scientific knowledge and engineering design practices to increase benefits while decreasing costs and risks. Widespread adoption of technological innovations often depends on market forces or other societal demands, but it may also be subject to evaluation by scientists and engineers and to eventual government regulation. New technologies can have deep impacts on society and the environment, including some that were not anticipated or that may build up over time to a level that requires attention or mitigation. Analysis of costs, environmental impacts, and risks, as well as of expected benefits, is a critical aspect of decisions about technology use.

Activity Materials
Part 1(Groups of two) Each group will need the following:
A small round bowl with a flat surface or glass/plastic Petri dishes. A piece of thin copper wire around 9 inches (23 cm).Water to cover the wand in the bowl or Petri dish and ONE drop of clear nail polish.

Part 1- The first activity is part of the lesson plan. Students will make a thin film and try to fish it out and observe any color interference that would be an indication of a thin film. Through open discussion, students realize that you cannot get too much information about the thin film if it does not have a substrate to place the thin film on it.

Place black paper in a tray and cover it with the smallest amount of water.

Make sure the paper is completely under water.
Add one drop of nail polish and wait approximately 1 minute to remove it slowly by the ends.
(Do not let the film slip from the paper.)
Let it dry
NOTE: In order to save time, the teacher can give out other thin film prints already made that are dry so the quantitative part of the activity can continue.
The results should look like this: 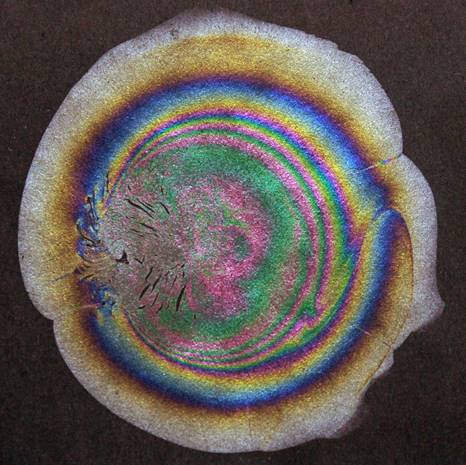 The discussion should lead to the fact that since white light has all the wavelengths, white light is not a good “ruler” to measure how thick the thin film is.

Now, the film will be exposed to specific lights that have specific wavelengths. Start with the red and count the DARK fringes that you see. Record this number. The dark fringe is where destructive interference occurs. Repeat the process with the green light. If done carefully, the students will notice that for every 4 red fringes, there will be 5 fringes with the use of the green light. This is why it is important to make the thin film printout to be used, with many rings. If you have less than 4 fringes of red, the green will also be the same amount. The ideal situation to observe the trend is being able to make thin films that you can see eight fringes with the red light and ten with the green light. This can be the students’ independent research; to make a thin film that shows this effect. The reason for this difference is that green light has a shorter wavelength than red so this “ruler”can be more accurate. Make sure that the same section is observed so proper comparisons can be made.

The introduction to the table below should be discussed with the students:

Where do the dark fringes come from?

Light reflects from surface and from the bottom.

The third part of the activity (5 min)

This activity will show that there is a difference in the view of the thin film fringes under two different colors of light.
Instructions: See diagram below 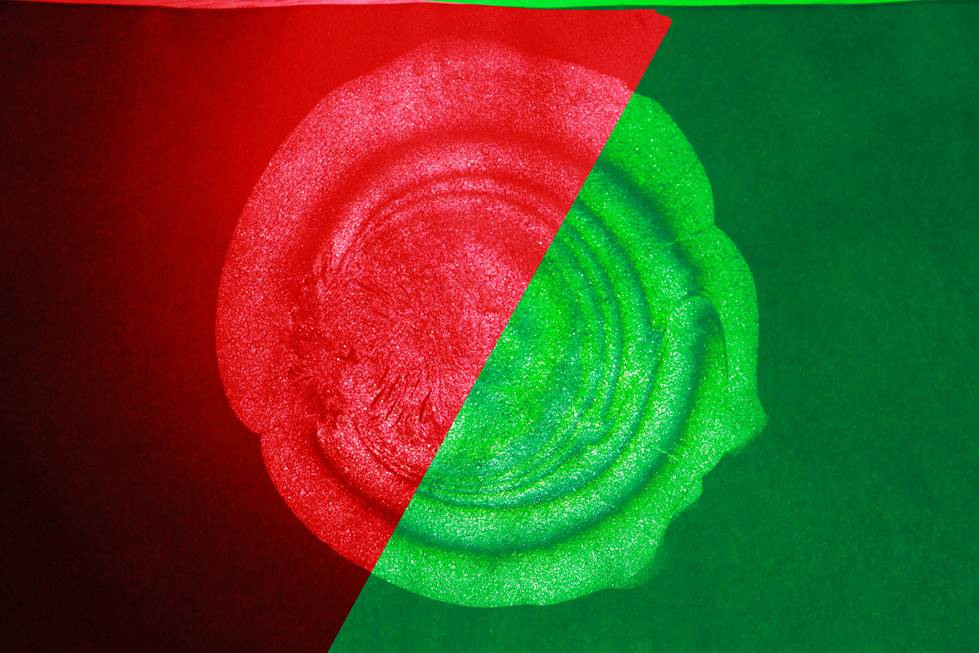 The Fourth Part of the Activity (10 min)

This is the part where the students will calculate the thickness of the film using the data collected when counting the dark fringes with the red light and the green light.

Conclusion ( 5 min)
In conclusion, we have a ruler as accurate as λ/2

Discussion on how could we be more accurate? By using a “ruler” with a very short wavelength such as X-Ray Reflectometry. X-Rays have a wavelength of 1.5 Å that is equivalent to 0.15 nm; a thousand times better ruler!

There should be an introduction about the technology known as thin films. The major points about this topic are the following:

Concepts that need to be developed if not known yet:

Figuring out the path length difference that the surface reflected ray takes and the internal reflected ray can determine the thickness of the film that will cause a particular λ of light to be reflected.

What Wavelength Goes with Color? (n.d.). In National Aeronautics and Space Administration. Retrieved July 10, 2013, from http://science-edu.larc.nasa.gov/EDDOCS/Wavelengths_for_Colors.html