Carbon is all around us and in us. It is in DNA, proteins, fats, and carbohydrates. It makes up approximately 20% of the human body. It symbolizes love and commitment in some cultures. It is scratched on paper to express ideas. It is a key ingredient in the fossil fuels used to power our cities and vehicles. Not surprisingly, carbon is also a key ingredient in the emerging field of nanotechnology. Aside from the naturally occurring forms of carbon, graphite and diamond, carbon is also found in the nanostructured forms of fullerenes (or buckyballs) and carbon nanotubes (CNTs).

Carbon can form the hardest natural material known on earth, diamond, and it can also form one of the softest materials, graphite. The properties of each material change as the arrangement of atoms changes. When carbon atoms form tiny tubes, called carbon nanotubes, the tubes are twice as strong as steel but weigh six times less!

In diamond, each carbon atom is bonded to four other carbon atoms. (A bond is the sharing of electrons between two atoms; we represent a bond by drawing a line between the atoms.) This creates a three dimensional network of bonds. The extended network of bonding is where diamond gets its strength. 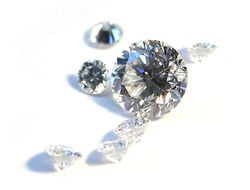 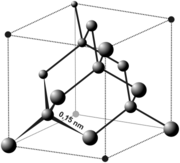 In graphite, the carbon atoms are only bonded in two dimensions. The carbon atoms form layered sheets of hexagons. Since there are no bonds between the layers, the layers can easily slip off one another. This is why graphite is a good material for pencils – layers come off and get left on the paper as you write. 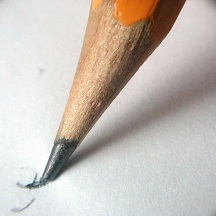 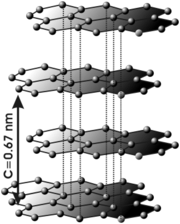 In 1996 Richard Smalley, Robert Curl, and Harold Kroto were awarded the Nobel Prize in chemistry for discovering a new form of carbon – buckminsterfullerene, or buckyballs. A buckyball looks like a nanometer-sized soccer ball made from 60 carbon atoms. It was named after Buckminster Fuller, an architect who created geodesic dome structures, like the one in the middle of Disney’s Epcot Center. 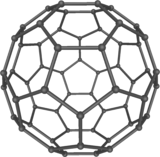 The structure of a carbon nanotube is like a sheet of graphite rolled up into a tube. Depending on the direction of hexagons, nanotubes can be classified as either zigzag, armchair or chiral. Different types of nanotubes have different properties. When scientists make nanotubes, they tend to get a mixture of several types. A major challenge in nanoscience today is finding a way to make just one type of nanotube.

Single-walled carbon nanotubes have been attached to the tip of an AFM probe to make the tip “sharper”. This allows much higher resolution imaging of the surface under investigation; a single atom has been imaged on a surface using nanotube-enhanced AFM probes. Also, the flexibility of the nanotube prevents damage to the sample surface and the probe tip if the probe tip happens to “crash” into the surface.

When a nanotube is put into an electric field, it will emit electrons from the end of the nanotube like a small cannon. If those electrons are allowed to bombard a phosphor screen then an image can be created. Several companies (Samsung, in particular) are researching how to use this technology to replace the bulky electron guns of conventional TV sets with these significantly smaller carbon nanotube electron guns. In the spring of 2005, Motorola announced a new “NanoEmissive Display” (NED) technology that could make more energyefficient and cost-effective ultra-flat (<1” thick) display screens a reality.

Learn more about how conventional televisions work at www.howstuffworks.com.

Dr. Morinobu Endo at Shinshu University mixed nylon with carbon fibers (100-200 nm diameter threads made in a similar manner to nanotubes), creating a nanocomposite material that could be injected into the world’s smallest gear mold (as of 2004). The carbon fibers have excellent thermal conductivity properties that cause the nanocomposite material to cool more slowly and evenly allowing for better molding characteristics of the nanocomposite. The “improved” properties of the nanocomposite allow it more time to fill the tiny micron-sized mold than nylon would by itself. The tiny gears currently are being made in collaboration with Seiko and Showa Denko KK (SDK) for use in watches. (see http://www.sdk.co.jp/english/news/2002/aanw_02_0082.html)

As we move into a new century, there is a global focus on a cleaner environment and developing renewable energy sources. To that end, a great deal of research is being devoted to hydrogen fuel cells. When oxygen and hydrogen react in a fuel cell, electricity is produced and water is formed as a byproduct. If industry wants to make a hydrogen-oxygen fuel cell, scientists and engineers must find a safe way to store hydrogen gas needed for the fuel cell.

Carbon nanotubes may be a viable option. Carbon nanotubes are able to store hydrogen and could provide the safe, efficient, and cost-effective means to achieve this goal. Hydrogen atoms bond to the carbon atoms of the nanotube, and can be later released with slight changes in temperature and pressure.

While nanotube-based hydrogen fuel cells are promising, there are no viable products on the market yet. (for information on how nanotubes store hydrogen, see Dillon, A.C. et al. Science. 286, 1127 (1999).)

An actuator is a device that can induce motion. In the case of a carbon nanotube actuator, electrical energy is converted to mechanical energy, causing the nanotubes to move. Two small pieces of “buckypaper,” paper made from carbon nanotubes, are put on either side of a piece of double-sided tape and attached to either a positive or a negative electrode. When current is applied and electrons are pumped into one piece of buckypaper and the nanotubes on that side expand causing the tape to curl in one direction. This has been called an artificial muscle, and it can produce 50 to 100 times the force of a human muscle the same size. Applications include: robotics, prosthetics.

Semiconducting carbon nanotubes display a large change in conductance (i.e., ability to store charge) in the presence of certain gases (e.g., NO2 and NH3). Researchers have been able to use nanotubes as sensors by exposing them to gas and measuring the change in conductance. Compared to conventional sensors, carbon nanotubes provide the advantages of a smaller size, an increased sensitivity, and a faster response.

In March 2005, researchers at the Naval Research Laboratory were able to detect minute amounts of sarin gas in under 4 seconds using a prototype nanotube gas sensor (previous sensors took over a minute to detect the same amount!). In the future, nanotube sensors could be used for security and environmental applications.

Scientists have exploited the mechanical and electrical properties of carbon nanotubes to produce molecular electronic devices. One of the most significant applications is nanotube transistors. Transistors are devices that can act like an on/off switch or an amplifier for current and are used in nearly every piece of electronic equipment in use today. Scientists have been able to use semiconducting nanotubes as compact, more efficient alternatives to conventional transistors.

Scientists are also testing fullerenes for drug delivery. Many drug molecules can be attached to a fullerene. The medicine loaded fullerene can then be attached to an antibody. Antibodies are Y-shaped proteins that can recognize and attach to things in the body called antigens. Viruses, bacteria and diseases in the body each have unique antigens. The antibody finds the disease in the body then the attached fullerene delivers the appropriate medicine. Just like with magnetic nanoparticles, medicine can be sent only to place where it is needed, leaving healthy cells alone