A light-emitting diode (LED) is a small light source that is illuminated by the movement of electrons through a semiconducting material. Families of semiconductors can be incorporated into devices that emit light over much of the visible spectrum upon electrical excitation. LEDs are increasingly used where low power consumption and long lifetimes are important. Some of the applications include: automotive break lights, advertising, and traffic signals. These light emitting diodes and diode lasers are revolutionizing many communication and display technologies.

Families of semiconductors can be incorporated into devices that emit light over much of the visible spectrum upon electrical excitation. These light emitting diodes (LEDs) and diode lasers are revolutionizing many communication and display technologies. The wavelengths of light emitted can be controlled using design principles based on the periodic table, including isovalent element combinations and solid solutions. A recent technological breakthrough is the blue LED, which permits additive color mixing when combined with green and red LEDs.

Light emitting diodes are composed of a chip of semiconductor mounted on one lead with a gold wire connected to the other lead. A plastic lens protects the semiconductor and focuses the light.

A simple circuit can be constructed with the LED, a 1K ohm resistor and a 9-volt battery. The resistor limits the amount of electrical current flowing through the diode so that it doesn’t overheat, which can destroy it.

As described below, simple chemical bonding ideas can be used to provide a qualitative understanding of how the color of light emitted by an LED is tuned by changes in the semiconductor’s chemical composition.
The following is a brief review of the band theory under pinning these devices. 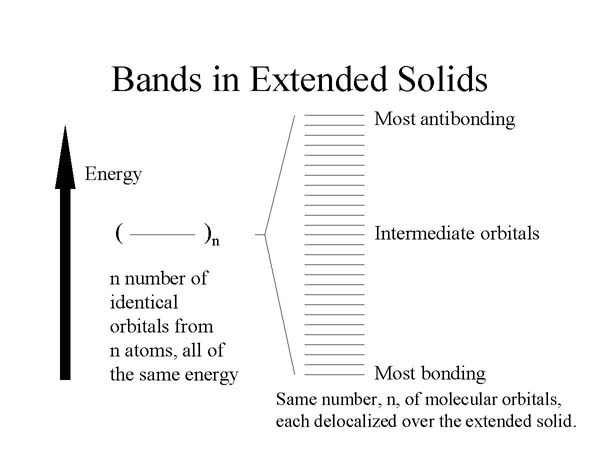 In the extended solid, many atoms interact with one another, and there will be the same number of molecular orbitals, delocalized over the entire solid, as the number of atomic orbitals being combined. The energy separation of the orbitals is so small from one such delocalized orbital to the next that they comprise a so-called “band.” The band represents a kind of electronic highway allowing electrons to move throughout the solid, thereby conducting electricity. For this to occur, however, the band cannot be empty or filled with electrons. Only if the band is partially filled can a net flow of electrons occur, corresponding to an electrical current.

The band gap energy, Eg, shown as the double-headed arrow, is the separation between the top of the valence band and the bottom of the conduction band. The size of the band gap decreases in passing from aninsulator to a semiconductor to a metal, where it is effectively zero. Electron-hole pairs are shown for a semiconductor as filled circles (electrons) in the conduction band and open circles (holes) in the valence band. 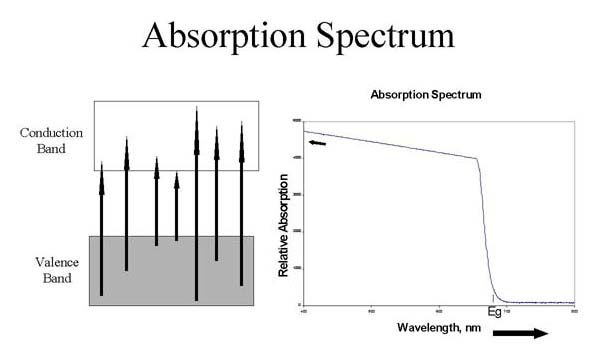 A wide range of energies can cause electrons to be excited from the valence band to the conduction band (absorption; figure shows electronic transitions, A, and corresponding absorption spectrum, B). 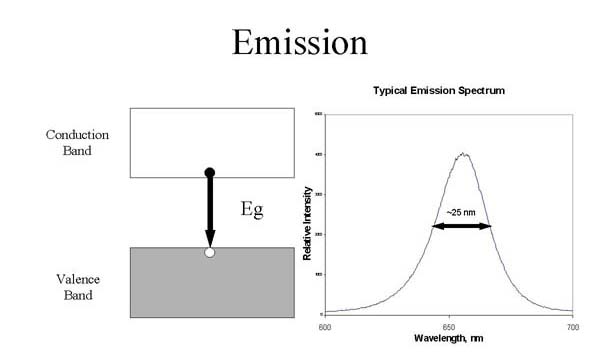 Excited electrons will drop from the bottom of the conduction band into the top of the valence band with the emission of light with a very narrow band width (emission; figure shows an electronic transition, A, and corresponding emission spectrum, B).

Semiconductors are typically prepared from combinations of elements having crystal structures related to that of diamond and the same average number of valence electrons per atom as the atoms in diamond.

Crystals of carbon, silicon, germanium, and the alpha form of tin from Group 14 of the periodic table all have the diamond structure, whose unit cell is shown above. The diamond unit cell contains all atoms of the same element arranged in a tetrahedral geometry.

Crystals of carbon, silicon, germanium, and the alpha form of tin from Group 14 of the periodic table all have the diamond structure, whose unit cell is shown above. The diamond unit cell contains all atoms of the same element arranged in a tetrahedral geometry.

Many complementary pairs of atoms with 1:1 stoichiometry (AZ) and the same average number of valence electrons per atom as the atoms in Group 14 such as ZnS, GaAs, and ZnSe have the zinc blende structure, asshown above. In zinc blende unit cells, there are atoms of two elements,each arranged in a tetrahedral geometry and bonded exclusively to the other kind of atom. 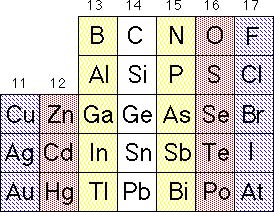 Portion of the periodic table emphasizing the
formation of 1:1 AZ solids that are isoelectronic
with the Group 14 solids.Complementary pairs
are indicated with similar shading: for example
Ge, GaAs, ZnSe, and CuBr. 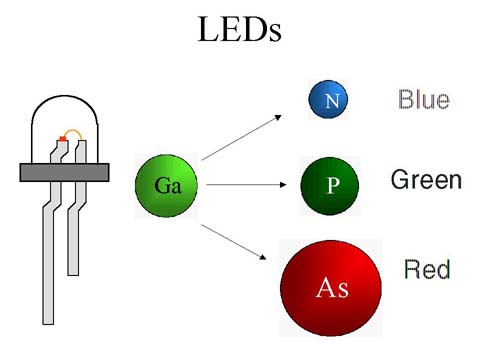 Blue light is emitted by LEDs containing In, Ga, and N, while GaP LEDsemit green light and and LEDs containing Ga, P and As emit red light. Light emitting diodes can be made that are solid phase solutions of threeelements, GaP1-xAsx, where x varies from 1 to 0.For x equals 0.6, the LED is red. The LED emits orange light when xequals 0.35. For x equals 0.15, the LED emits yellow light. Green lightis emitted when x = 0, i.e., LEDs with a composition of GaP.

For many combinations of elements in compound semiconductors, the trend inband gap energy can be qualitatively predicted based on interatomicdistance, with, as noted above, shorter bonds corresponding to larger bandgap energies. As the illustration shows, pairing Ga with As, P, andfinally N leads to a progressive reduction in bond length and acorresponding increase in band gap energy and LED color. This family ofsolids, in fact, permits tuning of the band gap energy from the nearinfrared (GaAs) to the red (As-rich solid solutions of GaAsxP(1-x)) to the green (GaP) and most recently to the blue (GaN).

The design and preparation of LEDs exemplifies exquisite control both of chemical composition and materials growth, resulting in devices with tailored electro-optical properties. Techniques like organometallic vapor phase epitaxy (OMVPE, also known as metalorganic chemical vapor deposition, or MOCVD) provide kinetically-controlled growth of semiconductor layers, which can be used to localize and optimize radiative recombination of electrons and holes in the solid. As noted above, the chemical composition of the layers controls their band gap energy and thus the color of light associated with the emitted photons that result from radiative recombination.

The group 13-15 semiconductors (called III-V semiconductors by researchers in the field) comprising the layers of LED dies are produced through co-decomposition of group 13 and group 15 precursor gas molecules. For example, using highly purified gases like trimethyl gallium and arsine, a layer of semiconducting GaAs can be formed by the decomposition of the gases on a heated substrate, according to equation 1.

The product subscripts indicate that these materials form a family of solid solutions, possessing, in this case, a common cubic zinc blende crystal structure but variable composition with (x + y + z) = 1. Typically, chemical compositions that are nearly lattice matched are used so that the atomic layers continue to grow epitaxially and defects are minimized.

Science Watch in their January/February 2000 issue has information about the Blue Laser Diode and an interview with Shuji Nakamura, the man who produced the first blue LED.

Lumileds has a nice presentation of the improvements in LEDs in recent years. 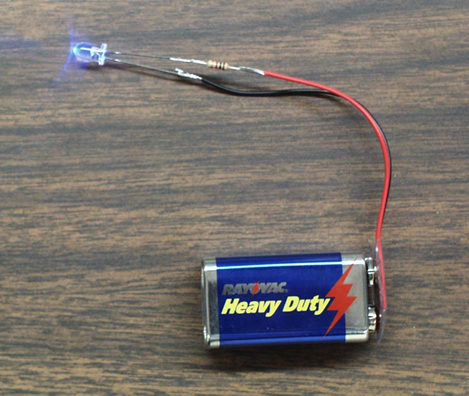 The circuit for lighting a blue LED is a very easy circuit to build. 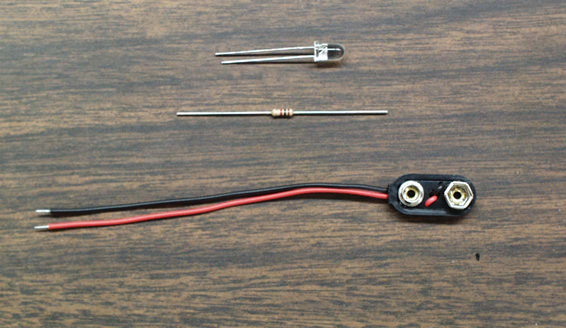 It consists of the blue LED, a 1K ohm resistor, and a 9-V battery clip.

Click here to find out where to get the parts to build your own blue LED circuit.

Organic light emitting diode arrays are showing great promise as replacements for liquid crystal displays. The OLEDs offer the advantage of emitting light whereas the LCDs have to be back lit. This is an excellent example of nanotechnology.

The OLED is composed of one or more specialty organic/polymer materials between two electrodes, one of which is transparent. Applying a voltage across the electrodes causes holes and electrons to be created. Light is emitted when these electrons and holes recombine. The color of light is dependent on the organic/polyer compounds involved. Full color OLED panels can be created by using a combination of red, green, and blue sections, as shown above.

OLEDs show promise for replacing some applications for LCDs. Since the molecules emit light, there is no need for backlighting the display, saving tremendously on power. The light emitted varies in color. The use of red, green, and blue emitting polymers eliminates the need for the filters needed in full color LCD displays.

The promise of the use of OLEDs in large color televisions has not lived up to the hype. The half-life of the blue OLEDs is still too short for this application. However, full displays for user products that are expected to be replaced in a few years with newer/better versions, such as cell phones, music players, digital camera displays, etc., are being produced. In the mean research continues on the blue OLEDs to get longer half-lifes, the length of time for the luminance emitted to decrease to half of its original value.

Kodak describes what they are and their attributes.

“Coming soon to a laptop near you” describes recent developments in OLEDs in laptop computer monitors.

LEDs are being used increasingly where low power consumption and long lifetimes are important. Here are a few examples. If you have seen other applications you would like to share, please send your digital image to: mcondren@cbu.edu. If you do not have a digital camera or scanner, send us your print and we can scan it.

Bi-color LEDs as used in programmable message boards.
The bi-color devices contain both a red and a green chip.
When the red and green chips are turned on simultaneously, they produce a yellow color. 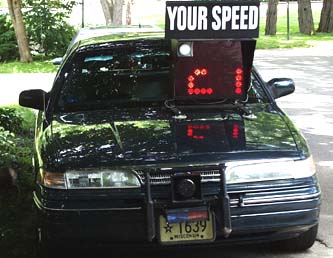 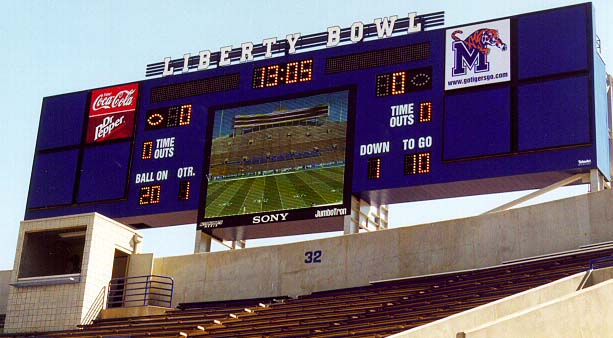 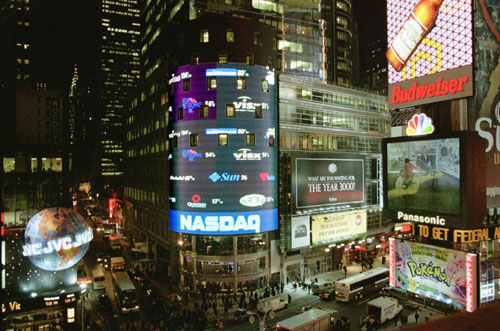 For a live view, see the Webcam 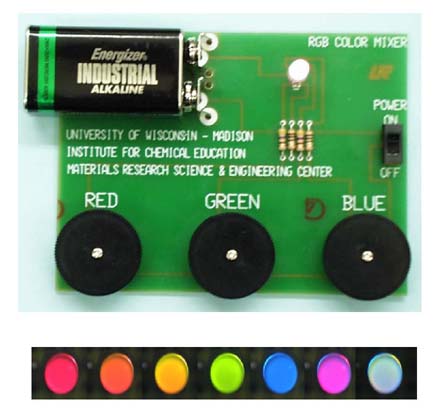 The Rainbow LED Board 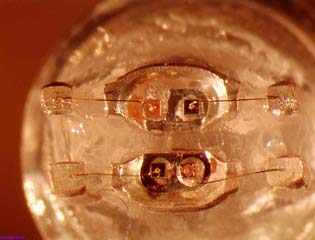 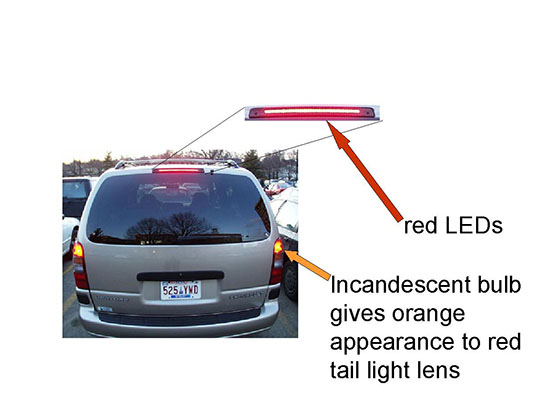 The brake light on this van uses LEDs, while the tail lights use incandescent bulbs. 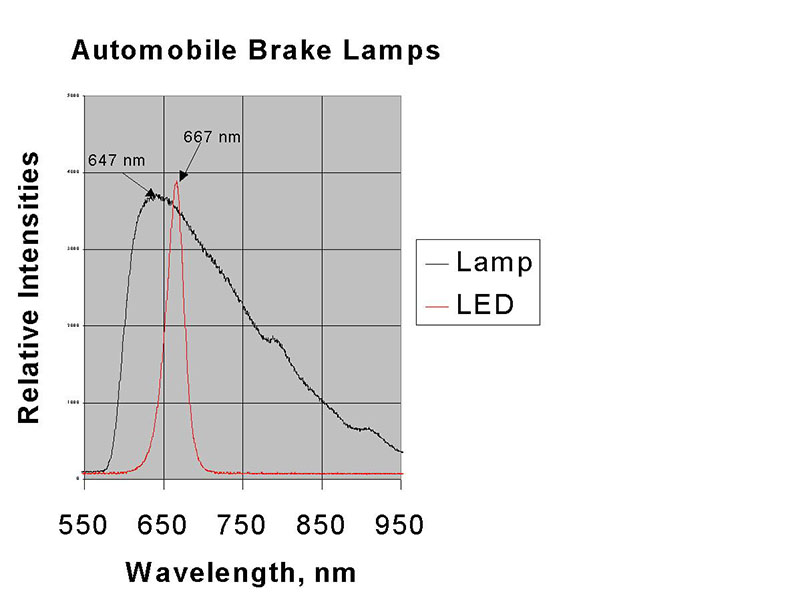 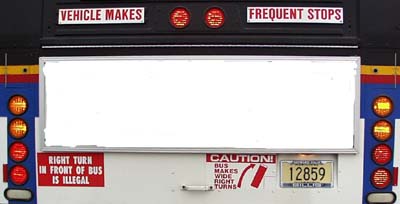 All of the newer city buses in Madison have LEDs on the rear as brake and tail lights, as well as turn signals. 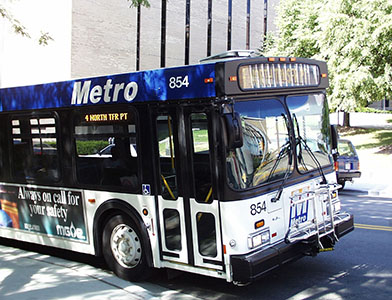 The newest buses have all of the external lighting, except the headlights, as LEDs. This includes the destination boards on the front and right side and the route number on the right front and rear of the bus. 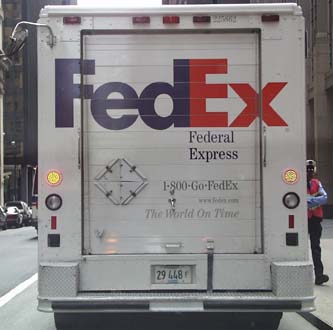 Medium size truck are also using LED tail/brake lights such as this FedEx truck in Chicago.

K.W. Muth Co. Inc. is manufacturing Signal® Mirrors that use LEDs in the side view mirrors. These appear as original equipment on some pickup trucks, sports utility vehicles, vans, and motorcycles. Their Wide Angle Signal® Mirror Kit can be fitted to any vehicle. 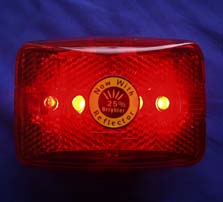 LEDs are being used increasingly where brightness, low power consumption, and long lifetimes are important safety concerns. Another advantage is that, if one element fails, the whole assembly does not stop working. As described in the Hewlett-Packard press release cited below, LEDs illuminate 200 milliseconds faster than conventional incandescent lamp, giving the driver of the trailing vehicle one car length greater stopping distance at 65 mph. 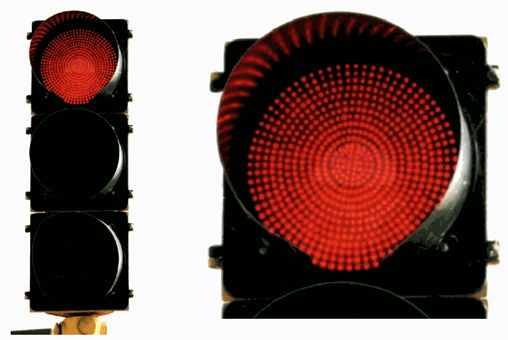 How many LEDs are in this red traffic light 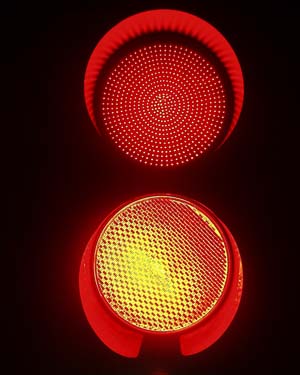 Note the  difference in the color between the LEDs on top and the incandescent bulb/red lens on bottom. 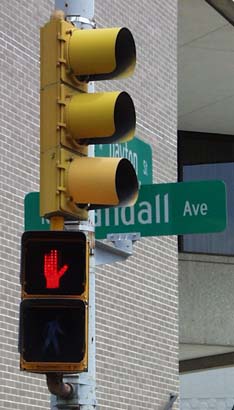 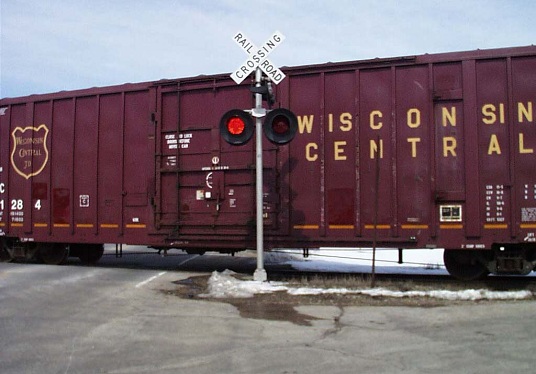 Railroad crossing flashers using LEDs. Use this link for more information about Railroad Applications of LEDs. 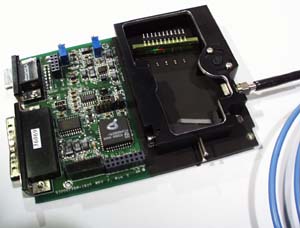 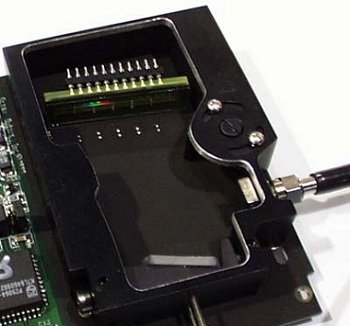 Linear arrays of photo-diodes are being used as detectors in spectrophotometers such as this model by Ocean Optics. In this particular device, the light enters the detector through the fiber optic cable to the right. The light is dispersed by the grating at the bottom of the device and detected by the array of photo-diodes near the top. For more information about diode arrays and charge coupled devices, see Charge Coupled Devices.