Quantum dots are very, very tiny particles on the order of a nanometer in size. They are composed of a hundred to a thousand atoms. These semiconductor materials can be made from an element, such as silicon or germanium, or a compound, such as CdS or CdSe. These tiny particles can differ in color depending on their size. Below is a collection of CdSe quantum dot nanoparticles that different in size as a result of how long they were allowed to form in the synthesis reaction that is described in the Video Lab Manual, Preparation of CdSe Quantum Dot Nanoparticles . 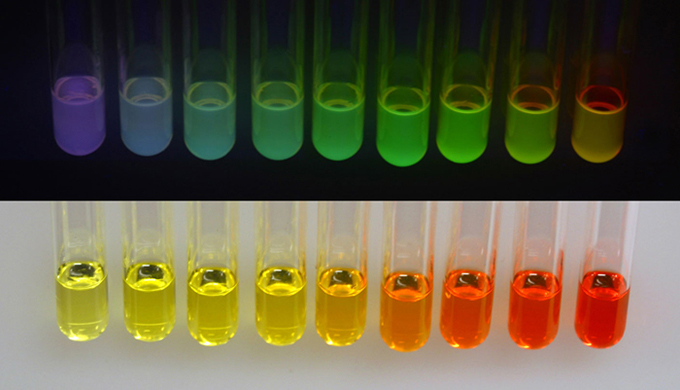 Color is well known to be influenced by particle size in both quantum dots and nanoparticles. The synthesis of gold nano particles is also described in the Video Lab Manual as Synthesis of Colloidal Gold. Below are some images of gold as nanoparticles and in bulk. 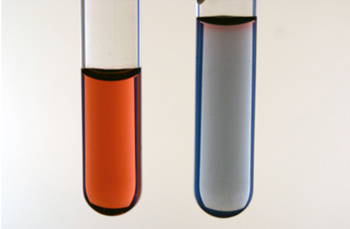 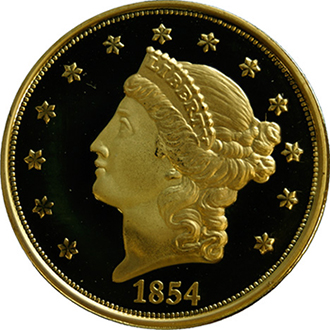 This image is a reproduction of a 1854 $20 gold piece , showing the normal bulk color of gold.

Quantum dots are of much interest for the other other unusual properties that they possess. These other properties include electrical and nonlinear optical properties. These unique properties of nano sized particles are partly the result of the unusually high surface to volume ratios for there particles, as many as one-third of the atoms are on the surface of the particle. As a result electrons and “holes” (holes result when an electron moves away from a bond, leaving a positively charged particle) are confined in a limited space inside the cluster.

These quantum electrical properties make these quantum dots of particular interest in the electronics industry. There small size means that electrons do not have to travel as far as with larger particles, thus electronic devices can operate faster.

Quantum dots can emit light if excited, the smaller the dot, the higher the energy of the emitted light. This ability to create dots that emit a rainbow of colors suggest that they could be used as biosensors. Unlike the dyes currently being used as biosensors, quantum dots do not degrade as rapidly. It is possible to make light-emitting diodes (LEDs) from quantum dots. They may also be used to emit white light for backlighting laptop computer screens. There is also great promise for using quantum dots in other solid state electronic devices. Quantum dots may some day be used as lasers.

While nanotechnology is not yet used to treat diseases, many new technologies are being tested. Scientists have many ideas about how nanoparticles might be used to combat diseases. One promising idea for cancer treatment is using magnetic nanoparticles to carry the drug to the tumor area. When cancer drugs enter the blood stream, they get pumped through the body’s system of arteries and veins. The drugs reach the tumor but also every other part of the body. Cancer drugs are designed to kill cancer cells but since they can go anywhere in the bloodstream, they may also kill healthy cells. Attaching drugs to magnetic particles would allow doctors to keep the medicine in a specific place by using magnets to hold them there. Using nano-sized particles is key because they are small enough to go through the blood stream.

Ferrofluids are magnetic nanoparticles that are suspended in a fluid. When magnets are brought near ferrofluids, the liquid forms spikes along the magnetic field lines. Besides their medical potential, ferrofluids are already used in some rotating shaft seals and as dampers for high-end loudspeakers.

Silver is a naturally antibacterial substance. Because they have a relatively large surface area available, silver nanoparticles are especially effective at killing germs, mold and fungus. Materials such as clothing and food containers can be treated with silver nanoparticles to help prevent disease and spoilage.