Imagine that you could throw some bricks, piping, wires and wood onto a plot of land and all the parts spontaneously arranged and grew into a house. This self-assembly of this house, would certainly be amazing but Nature has been automatically arranging in this way for ages. Nature is very good at building structures but instead of bricks and mortar it uses molecules like proteins and lipids for its building blocks. For instance, a seed can take molecules from the air, soil and water and rearrange them into a tree.

Molecules in nature are programmed to arrange themselves in certain ways. One of the simplest examples is something called a lipid bilayer. Lipid bilayers make up the membranes of cells. Each lipid is a molecule with a charged end that likes to be in water and a neutral end that is similar to oil.

Olive oil does not like to mix with water-based vinegar.1

Since the inside and outside of cells are mostly water, the lipids arrange themselves with their oil-like parts “hiding” on inside and their water-like parts on the outside forming two layers of lipids, or a lipid bilayer. This is just one example of how molecules in nature can self assemble to make a larger functional piece. 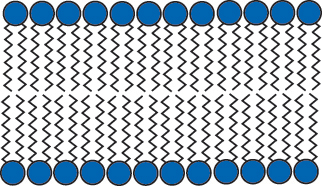 Lipid Bilayer – the oily parts hide on the inside of the cell membrane.

Self-Assembly in the Laboratory

Nature is very good at self-assembling complicated structures from less complicated pieces. Scientists would also like to get molecules to self-assemble at the nanoscale to get new and interesting properties. Scientists have made things called self-assembled monolayers (SAMs); these are organized coatings on a surface just one molecule thick. The most common monolayers are made from alkanethiols – molecules that have an oil-like chain with a sulfur atom at one end.

Sulfur likes to bond to gold and silver surfaces so when the alkane thiol comes in contact with a gold surface, the molecules self assemble to form the monolayer. 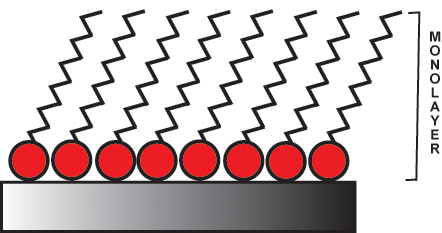 Alkanethiols will self-assemble on a silver surface into an organized SAM. 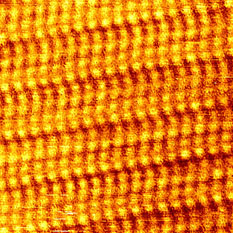 Top view of a monolayer – the bright spots on this STM image are the atoms on the ends of the oily chains.2

Water drops bead up on a monolayer surface because of the oily chains.