In this animation, a short space-filling model segment of B-DNA is rotating around its helical axis. This DNA segment has the well known double helical shape and contains 10 monomer units, or one full turn (or period) of the double helix. The phosphate groups (gold = P and red = O) lie along the outer edge of the molecule. The deoxyribose sugar units bonded to the phosphates appear mostly gray, because the carbon atoms, which comprise many of the atoms in sugars, are shown in gray, (the hydrogens are not shown). The base pairs that lie on the inside of the double helix, whose complementary hydrogen bonding holds the double helix together, look blue and gray (blue = N and gray = C). See if you can count the number of base pairs in the DNA segment.

As the animation proceeds, one strand of the double helix turns yellow, so you can more easily see each complementary strand of the DNA molecule.

Deoxyribonucleic acid (DNA) is a polymer composed of three fundamental building blocks: a phosphate, a sugar, and one of four nitrogen containing bases. The cyclic, five-carbon sugars (deoxyribose units) are linked together by the phosphate groups to form the backbone of the polymer. The four heterocyclic nitrogenous bases are bonded to the sugars. The bases are: cytosine, C; guanine, G; adenine, A; and thymine, T. 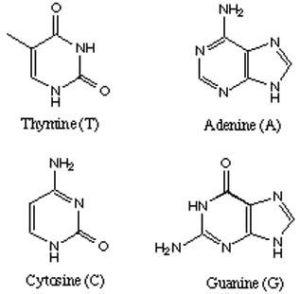 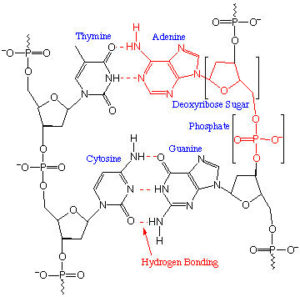 The earliest research on what we today know as DNA was performed by Friedrich Miescher, a Swiss biologist, in 1868. He isolated a phosphorus-containing substance from the nucleus of cells. He also determined the acidic nature of the substance. Later he isolated a similar substance in the nuclei of salmon sperm cells. Oswald Avery, Colin Macleod, and Maclyn McCarty, at the Rockefeller Institute, proved that DNA was genetic material in 1943. Their work went against the commonly accepted theory that proteins contained the genetic information. Alfred Hershey and Martha Chase, in 1952, published their work that confirmed that DNA was genetic material. They won the Nobel Prize in Medicine and Physiology in 1969 for their research. Erwin Chargaff, of Columbia University, proposed in 1950 that all samples of DNA contained the same four nucleotides, cytosine, C; guanine, G; adenine, A; and thymine, T, and that the percentages of those nucleotides were always such that %G = %C, and %A = %T.

Watson’s and Crick’s model for the structure of DNA “has two helical chains each coiled round the same axis.” They stated that ” each chain consists of phosphate diester groups joining beta-D-deoxyribofuranose residues with 3′,5′ linkages”. Furthermore “both chains follow right-handed helices, but owing to the dyad [Ed: group of two chains] the sequences of the atoms in the two chains run in opposite directions”.  They go on to state that “the bases are on the inside of the helix and the phosphates on the outside” and that “the structure repeats after 10 residues on each chain”.

To prove the model for the structure of DNA, four questions had to be answered:

Question 1 What is the shape of the molecule? Is it a straight chain? Are there two or three strands in the helix?

Question 2 Are the chains parallel or anti-parallel? That is do the chains run in the same or opposite directions?

Question 3 Are the phosphates on the outside and the bases on the inside of the helix or vice versa?

Question 4 How are the bases involved? How many are there per coil (period) of polymer chain? How are they bonded?

The X-ray diffraction determinations of the structure of DNA began in the early 1950s. In 1951, Rosalind Franklin joined John Randall’s research group at King’s College, University of London, to work on DNA, along with Maurice Wilkins and with Raymond Gosling, a graduate student in the group who had taken an X-ray photograph of DNA. J. D. Watson and F. H. C. Crick were working in the Bragg X-ray research group at Cambridge.

Answer to Question 1 What is the shape of the molecule? Is it a straight chain? Are there two or three strands in the helix?

In May of 1952 Franklin obtained the first good X-ray diffraction pattern of the wet B form of DNA. The features of Franklin’s photo suggested that DNA had a helical structure based upon the previous work of Stokes and Wilkins and Cochran, Crick, and Vand.

Wilkins is reported to have shown the unpublished X-ray photograph of DNA to Watson and Crick, at which point Watson is reported to have said “The instant I saw the picture my mouth fell open and my pulse began to race…. the black cross of reflections which dominated the picture could arise only from a helical structure… mere inspection of the X-ray picture gave several of the vital helical parameters.”  Wilkins, Stokes, and Wilson interpreted the results of their X-ray photograph as consistent with a helix of 2 nm diameter. X-ray diffraction studies determined two levels of periodicities along the long axis of the DNA fibers. The primary one had a period of 0.34 nm and the second one had a 3.4 nm period. The X-shaped cross pattern and its symmetry suggested to Franklin and also to Watson and Crick a helix arrangement for the B form of DNA. The Watson and Crick model for DNA called for a double helix. Franklin concluded that the missing fourth layer line agreed with the double helix “if one molecule is displaced from the other by about three-eighths of the fibre-axis period”. Thus, the answer to Question 1 came from Franklin’s X-ray photo.

Answer to Question 2 Are the chains parallel or anti-parallel? That is do the chains run in the same or opposite directions?

The density data as well as the X-ray data suggest that there are two chains. In the Watson and Crick model, the two chains are held together by a base on one chain linked to a base on the other chain.  Adenine and guanine are purines while thymine and cytosine are pyrimidines. A purine on one chain always bonds to a pyrimidine on the other chain. Chargaff’s rules suggest that adenine, A, always bonds to thymine, T, and guanine, G, always bonds to cytosine, C, because the percentage of A is always approximately the percentage of T and the percentage of G is always approximately that of C, even though the percentages of A and T may be very different than the percentages of G and C. The purine can be on either chain but its partner pyrimidine must be on the other chain. This suggests that the chains run in opposite directions. The base is attached to carbon 1′ of the sugar with phosphates attached to carbons 3′ and 5′. In the figure below, the links of the phosphates to the deoxyribose sugars on the left strand run 3′ to 5′ bottom to top whereas those on the right strand run 3′ to 5′ top to bottom. 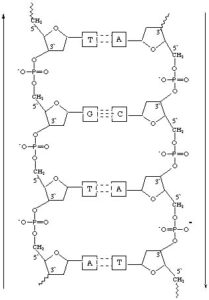 Watson’s and Crick’s model would suggest that the double helix is “a pair of templates, each of which is complementary to the other”, which, prior to duplication, separate and unwind into two chains. “Each chain then acts as a template for the formation on to itself of a new companion chain, so that eventually we shall have two pairs of chains where we only had one before. Franklin’s X-ray data also suggested “that there are only two molecules in the primitive unit cell” and that the two chains were offset, which was consistent with the Watson and Crick model. Thus Question 2 is answered.

Answer to Question 3 Are the phosphates on the outside and the bases on the inside of the helix or vice versa?

Speaking of their model for the sodium salt of DNA, Watson and Crick stated “As the phosphates are on the outside, cations have easy access to them.” Wilkins, Stokes, and Wilson commented that their X-ray photograph “suggests the presence of nitrogen bases arranged like a pile of pennies in the central regions of the helical system”. Thus, Question 3 was answered.

Answer to Question 4 How are the bases involved? How many are there per coil (period) of polymer chain? How are they bonded?

In the Watson and Crick model, DNA is composed of two chains joined by complementary bases that are hydrogen bonded to each other. There are 10 residues, nucleotides, in the 3.4 nm period of the chain. The periodicity of 0.34 nm, deduced from the diffraction data, is due to the nucleotide repeat distance. The 3.4 nm layer lines are attributed by Wilkins and Franklin to the repeat distance or period of the chain. This suggested 10 nucleotides per period of chain. These data were the answer to Question 4.

The Search for DNA – The Birth of Molecular Biology
http://www.accessexcellence.org/RC/AB/BC/Search_for_DNA.html

DNA from the beginning
http://www.dnaftb.org/dnaftb/

For more information about Oswald Avery

For more information about Erwin Chargaff

For more information about F. H. C. Crick and the structure of DNA

For more information about Rosalind Franklin and the structure of DNA

For more information about Alfred Hershey and DNA

For more information about Friedrich Miescher and DNA

For more information about James D. Watson and the structure of DNA

For more information about Maurice Wilkins and the structure of DNA