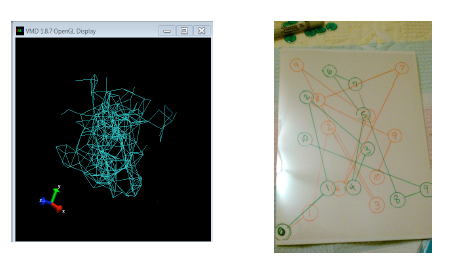 Chasing a trail of a Nanoparticle Audience:

EM.Q.1 The structure and levels of organization of the matter.

EM.Q.1.1 Describe matter based on its properties. Compare and contrast the properties of solutions, suspensions and colloids, and provides examples of these types of mixtures.

B.2 Structure and properties of matter

B.4 Motions and forces

Materials: (Materials for 5 groups of students, 3 members each)

3 crayons or markers [same color as the plastic dots]

Before the activity realization, the topic about heterogeneous mixtures should be discussed in class. It is recommended that each group divides the tasks of taking notes, experimenting and assisting among the 3 students. Preferably, the group should work in a table. All materials should be placed over the table for easy access.

1. Use the tape to attach the graph paper to the bottom of the box.

2. Place a transparency over the graph paper.

3. Place a set of 10 plastic dots (same color) in the center of the box. Each circle represents a position in the movement of a nanoparticle.

4. Cover the box with the lid, shake the box, and then place the box over the table.

5. Carefully, remove the lid from the box without moving the box from its position.

6. Use the marker/crayon, of the same color as the plastic dots, to make a mark (dot/cross/circle) in the transparency for each plastic dot. The students will be careful not to move the other dots from their position while making the marks. Then, they will write, next to the mark, the corresponding number according to the label in the dot.

7. Repeat the procedure from step 3 to 6 for the remaining two colors. A new transparency should be used for each color.

8. Use the rule to trace lines between the marks using the numeric sequence.

9. Once finished, share the data with peers and make their own conclusions.

Students must answer the following questions on the student sheet.

a) How would you describe the offset of the first particle?

b) Did the displacement occur in only one direction? Why?

c) If we put all particles (three colors) inside the box, will we always get the same displacement? Why?

d) Choose two of your peers and share your data and get theirs, what can you say about your particle displacement with respect to those of your peers?

e) Do the graphs obtained describe the Brownian motion? Explain your answer.

Use transparent lids to cover the boxes so the students can observe the interaction between particles. The student will search for information about the contribution of Albert Einstein with regard to the study of the behavior of particles and the equation describing the mean square displacement of a particle. Students present their own models to describe the Brownian motion.

Brownian motion: constant erratic movement of tiny particles suspended in a liquid or gas. This phenomenon was discovered in 1827 by the Scottish botanist Robert Brown. Due to its proper motion, the fluid molecules randomly collide with suspended particles and cause them to move. In 1905, Albert Einstein gave a mathematical explanation of the phenomenon and integrated it into kinetic theory. The French scientist Jean Baptiste Perrin performed one of the first estimates of Avogadro’s number by a quantitative study of Brownian motion.

Nanotechnology: the study and development of nanoscale systems, “nano” is a Greek prefix meaning “one billion” applied to units of measurement, it corresponds to a billionth of a meter (10 -9); so nanotechnology explores the world from a nanometric level of resolution between 1 and 100 nanometers (nm) approximately. An atom is less than 1 nm but a molecule can be bigger; now, the upper limit is set to 100 nanometers because under this measure special properties that are governed by the laws of quantum mechanics are observed.

Student Sheet: Chasing a trail of a Nanoparticle

Displacement of a particle: Brownian Motion

Instructions: Read carefully the procedure, if you have any questions please contact the teacher for clarification. Do not begin the activity until the teacher tells you to. The group will perform the work cooperatively. Record your observations in the laboratory notebook.

1. Place a graph paper in the bottom of a box and keep it in place with tape.

2. Place a transparency over the graph paper.

3. Place the particles (plastic dots) of one same color in the center of the box.

4. Carefully seal the box with the lid.

5. Shake the box and place it on the table.

6. Remove the lid slowly to avoid moving the box.

7. With a permanent marker/crayon of the same color as the particles, mark in the transparency (with a dot/cross/circle) the position of each particle. Write next to each mark the number corresponding to the label over the particle. Avoid moving the other particles out of place while making the marks.

8. Once all particles are marked, remove the transparency from the box and place another. 8. Repeat the steps from 3 to 8 for the remaining two colors. Remember we are simulating the change of position of a particle in a time interval.

10. Now, put the three transparencies together, one on top of the other. Describe what you see, write it down in your notebook.

12. Answer the following questions in your laboratory notebook.

a) Describe the movement of particles

b) Did the displacement occur in one direction? Why?

c) If we put all particles (three colors) in the box, will we always get the same displacement? Why?

Pick two of your peers (from 2 different groups) and share your data and get theirs, what can you say about your particle displacement with respect to those of your peers? Describe in your own words how is the motion of a particle.

Find information on the contribution of Albert Einstein with regard to the study of the behavior of particles and the equation describing the mean square displacement of a particle.