Explore the polarization of light and then learn how to create your own piece of art using polarized light and cellophane!

This work is licensed under a Creative Commons Attribution-NonCommercial 4.0 International License.

In order to fully understand the science behind this activity, we need to note two characteristics of light.

Light, like from a flashlight, consists of many electromagnetic waves with different polarizations. In the figure below, the arrows represent the direction of polarization. A polarizer (like you might find in expensive sunglasses), blocks out light that is polarized in all directions except those that match the polarizer, polarizing the light. 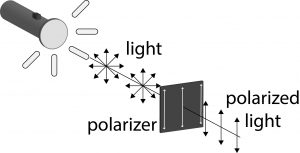 Most commercial polarizers are made using polyvinyl alcohol. Polyvinyl alcohol is a polymer, meaning that its molecules are long chains of repeating units. The polyvinyl alcohol polymer is stretched during manufacturing, causing the long, molecular chains to align in the direction they were stretched. Iodine is then added to the polymer, causing the molecular chains to conduct electricity along their length. When light passes through the polarizer, only the light waves with electric fields oscillating in the same direction as the conductive polymer chains make it through, with the rest being absorbed.

Some materials, like the cellophane, are birefringent, meaning that its refractive index depends not only on the wavelength of the light, but also on its polarization. As light enters a birefringent material, it resolves into two components.  In the image below, you can see blue light passing from the left to right through a birefringent calcite crystal and being split into two beams. The refractive indices that these two components experience differ, so the light becomes “phase shifted.” This phase shift causes the light leaving the material to have a different polarization than when it entered!

Putting it all together

In this activity, we start with white light, like from a flashlight, which contains all the colors of light. This white light becomes polarized as it passes through the first polarizer. Next, the polarized light passes through the birefringent cellophane, becoming phase shifted and leaving with a different polarization. Since the refractive index of the cellophane depends on both the polarization and the wavelength of light, different colors phase shift a little differently, causing their polarization to change differently, too. 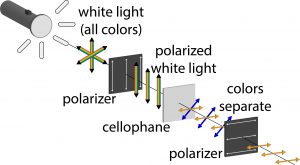 Depending on the thickness of the material and the wavelength of light, this “phase shift” can also cause the light to interfere with itself such that the light is extinguished. When we view the light passing through the second polarizer, at certain angles we see individual colors. We see the individual color, for example yellow, because the complementary colors, in this case purple colors, were extinguished due to the phase shift, leaving us to enjoy the beautiful yellow light.

Do NOT look directly at the sun or at laser light sources, even through polarizers.

Below are a few examples of art created using this method to give you some inspiration! 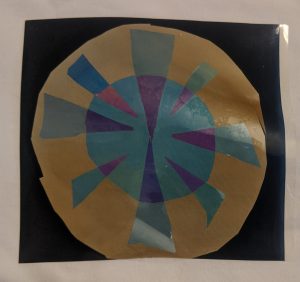 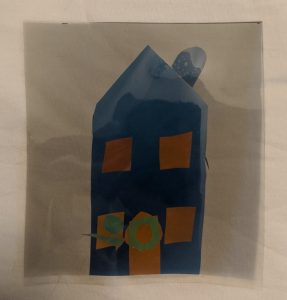