Which soda do you prefer?

Students build and use a home-made polarimeter to perform a variety of experiments including identifying and measuring the concentration of sweeteners in soda. The intended audience grade level is 10th- 12th grade Chemistry classes.

Light is an electromagnetic wave. Light from the sun or from a light bulb is said to be unpolarized because the electric and magnetic fields in the wave oscillate at right angles to each other and randomly in any direction in space. If the light passes through a polarized film, say through the lens of polarized sunglasses, only light with a specific orientation is allowed to pass. This is because conductive polymer chains in polarized lenses are all aligned in one direction.

Chiral substances are carbon based compounds which contain four different substituents (a substituent is something bonded to the carbon). A molecule of such a substance will have another version of itself with the same chemical formula but that is nonsuperimposable. Such molecules are called enantiomers of each other. For example, a pair of gloves are nonsuperimposable…in other words there is no way to rotate the right and left hand gloves such that they can be laid on top of each other and look the same.

A pair of socks, on the other hand, are superimposable because you can rotate the socks such that they can be paired together. We say that gloves have a “right or left-handedness,” whereas a pair of socks do not.

Chiral molecules likewise have a “right or left-handedness.” A molecule such as bromo-chloro-fluoromethane has two nonsuperimposable versions of each other and is chiral as shown below.

Chiral molecules have two enantiomers of each other which rotate plane polarized light at the same angle but in the opposite direction. We can therefore learn something about the structure and chirality of a molecule by observing how it interacts with plane polarized light. For example, dextrose was observed to rotate polarized light to the right or clockwise known as “dextrorotatory” thus the name dextrose. Levulose rotated the light to the left or counterclockwise known as “levorotatory” thus the name levulose. The molecules rotate light differently because as photons of light contact the molecule there are time delays between absorption and emission which causes the refraction of the light. The amount of refraction or bending also depends on light wavelength.

In fact most sugar molecules are chiral. If you look at the structure of a glucose molecule, you will notice the number 1 carbon (anomeric carbon) has four different substituents bonded to it and is therefore chiral. Such a carbon is known as a stereogenic center. Are there any other stereogenic centers in glucose?

The angle at which a molecule rotates polarized light is called its specific rotation or optical rotation, 𝜶 , and is an intrinsic property of the substance just like density or melting point. In sugars, each stereogenic center rotates light differently so the specific rotation of the molecule is the sum total. In fact, it is possible for the optical rotations of stereogenic centers to “undo” each other and have a chiral molecule which is optically inactive.

Specific rotation does depend on temperature and the wavelength of polarized light used and is usually reported at 20℃ and the bright line of sodium at wavelength 589 nm. The actual angle of rotation of polarized light also depends on the path length through which the light passes, the concentration of the substance, and the specific rotation of the substance. This is mathematically written as Biot’s Law:

The technique which is used to measure the optical rotation of substances is called polarimetry and the instrument used is called a polarimeter. A polarimeter basically consists of a light source, two polarizing filters, a chamber to put a sample, and a detector to measure the specific rotation.

A sort of worst case scenario happened with the morning sickness drug thalidomide in the 1960’s. One enantiomer of the drug was responsible for causing birth defects while the other enantiomer was inert until metabolized in the body. The usefulness of many drugs is dependent on using the correct enantiomer.

Using the polarimeter you built, you can now conduct many experiments in polarimetry.

In this experiment, students will observe how light intensity changes as the polarized film on the polarimeter is rotated.

Each enantiomer of a chiral substance will rotate plane polarized light the same amount but in opposite directions. In this experiment, students will observe how two different enantiomers rotate polarized light. 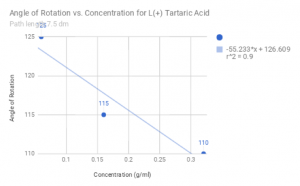 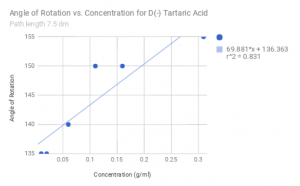 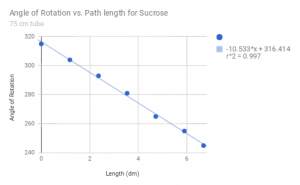 Experiment #4: Determining the Concentration of an Unknown Sugar Solution

In this experiment, students will determine the concentration of an unknown sugar solution prepared by the teacher. Students will prepare a calibration curve using observed optical rotation vs. concentration for a series of standard solutions. By measuring the observed optical rotation of the unknown and the line of best fit on the calibration curves, students can calculate the concentration of the unknown solution. This is similar to the Beer’s Law experiment often done in introductory chemistry.

Example: Angle of rotation for the unknown was found to be 315°. Calculate the concentration of the unknown.

Note: the equation should have units of mL (milliliters)

In this experiment, students will prepare standard solutions of various sugar solutions. Using Biot’s Law, the specific rotation of the sugar can be calculated. The teacher will then give the students an unknown sugar solution and ask the students to identify it. 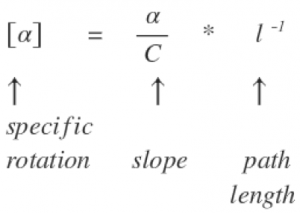 Experiment #6: Which soda do you prefer?

In the 1970’s, US manufacturers began using high fructose corn syrup to sweeten products previously sweetened by sugar (sucrose) due to the cheaper price of using corn instead of sugar. High fructose corn syrup is actually a misnomer given its composition in drinks such as soda is normally 55% fructose, 42% glucose, and 3% other ingredients. Over time there has grown a sort of backlash against the use of high fructose corn syrup (HFCS) with claims that the rise in the use of HFCS coincides with the rise in obesity levels. In response, sodas such as Blue Sky advertise all natural sugar with no added HFCS and can be found in the organic food sections in supermarkets. In addition, some people say they prefer the taste of foods sweetened with sucrose instead of HFCS. For example, some people seek out “Mexican soda” because sodas such as Coke are sweetened with cane sugar instead of HFCS in Mexico. “Kosher” soda sold in the US during the Jewish Passover is also sweetened with sucrose instead of HFCS.

Question. But how about you? Do you prefer the taste of soda sweetened with sugar or high fructose corn syrup or can you tell a difference? How can we test the labels on a soda to verify the sweetener used is the one advertised? In this experiment we will use Sprite flavored with sugar and compare it to Sprite flavored with high fructose corn syrup using an instrument called a polarimeter.

Taste test. The teacher will put out samples of sugar flavored Sprite and HFCS flavored Sprite in two cups. This will be conducted as a blind taste test so the teacher will not reveal which soda each cup contains until the end of the experiment. Record any observations of taste as well as any visual observations (i.e. can you see any difference between the two types of sodas?) below. At this point, keep all observations to yourself as to not bias or influence classmates.

Decide which soda you prefer or if you have no preference record below. Report the decision to your teacher. The teacher will keep a tally of the results to share with the class at the end of the experiment.

The general consensus is the health problems caused by HFCS are no different or worse than sucrose.

A problem we ran into was the Mexican Sprite with sugar in it did not exactly match the optical rotation of the cane sugar A little investigation on-line revealed even soda sweetened with cane sugar may actually contain HFCS once the consumer drinks it.

This is because in the acidic conditions found in soda, the sucrose breaks down into glucose and fructose with almost 90% of the sucrose breaking down within 100 days. The decomposition can occur more rapidly if the soda is exposed to higher temperatures.

To determine the fructose content of the Mexican Sprite and how much of the original sucrose had broken down, a series of standard solutions of HFCS were prepared and a plot of angle of rotation vs. percent fructose was prepared. 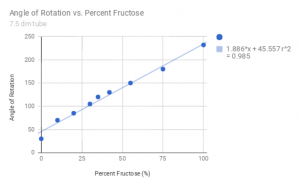 The optical rotation of the Mexican Sprite was observed to be 100°. Using the calibration curve this corresponds to a percent fructose of 28%.

This means the Sprite was actually 28% fructose, 28% glucose, and only 44% sucrose. In other words, 56% of the sucrose had already decomposed meaning the soda was bottled roughly two months prior.