Microfluidics is the science and technology of systems that process or manipulate small quantities of fluids using channels with dimensions of tens to hundreds of micrometers1.  At the macroscopic scale, fluids mix through turbulent flow such as that seen when a drop of food coloring is added to water.  At the microscopic scale inertia is less important than viscosity so two fluid streams will flow side-by-side, moving smoothly in parallel, a process known as laminar flow.  In laminar flow the two fluids mix only by diffusion across the interface. 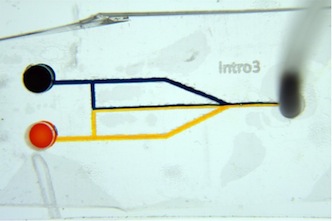 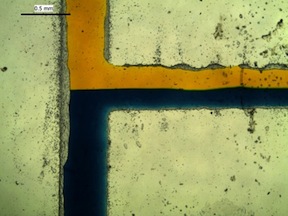 The ability of microfluidic channels to use very small quantities of reagents provides an advantage in applications involving chemical synthesis and analysis, as well as sample detection with high sensitivity2. Microfluidics devices are used in a wide variety of applications including inkjet printers, immunoassays, medical diagnostics, environmental monitoring and chromatography.  For example, acid-base titrations that use only 1 mL of solution can be done in a microfluidic device by varying flow rate of the sample and titrant 3.

Many microfluidic devices are prepared using photolithography to etch silicon or glass. In photolithography, ultraviolet light is used to transfer a geometric pattern to a light sensitive chemical called a photoresist that is coated on a substrate.  After a series of chemical treatments, the pattern is engraved onto the substrate creating a negative of the micro-sized channels of the device that serves as the stamp or template for the microfluidic device. Once the template is created, a layer of poly(dimethylsiloxane) (PDMS) is poured onto the mask and allowed to polymerize. 4  PDMS is non-toxic and safe for use in the classroom. 5 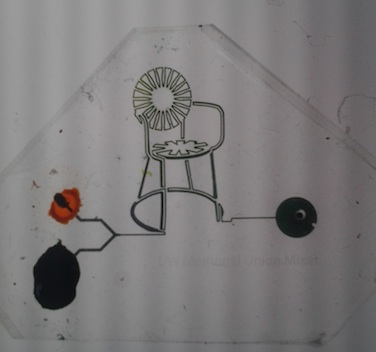 A microfluidic pattern in the shape of the chairs found on the UW Memorial Union terrace.