It is not possible to see atoms using an ordinary light microscope. The wavelength of visible light is between 400-700 nanometers, so details smaller than this are very difficult to see with light. How do scientists figure out how atoms are arranged if they can’t see them?

One way that scientists can determine the arrangement of atoms is by using x-ray diffraction. The same x-rays that a doctor uses to create a picture of your bones can be passed through other materials to help create a picture of the atoms that make them up. Since atoms are much, much smaller than bones, though, “seeing” atoms with x-rays is a little bit more complicated than seeing your skeleton.

X-rays are electromagnetic waves with a wavelength of around 0.1 nanometers. Because the wavelength is the about the same size as the spaces between atoms in a solid, x-rays get bent – or diffracted – when they pass between atoms.
Things like table salt, gold, and DNA are known as crystalline substances because their atoms are arranged in a regular, repeating pattern. When x-rays pass through a crystalline substance, the arrangement of atoms bends the x-rays in a specific pattern.

Scientists are able to use the pattern formed by x-rays that have moved through a crystalline substance to figure out how its atoms are arranged.

X-ray diffraction images of DNA were used to discover its double helix structure. 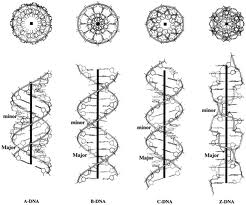 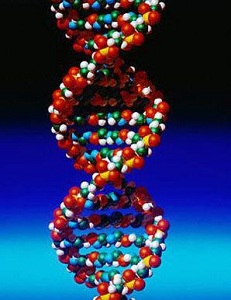 Although an x-ray diffraction image of DNA may not look like much to you, scientists can use math to analyze the dark areas that you see, allowing them to determine the arrangement of the atoms. In this case, the mathematical analysis told them that the atoms in DNA were arranged in a spiraling double helix like the one above.